Chinese people are believed to have enjoyed tea drinking for more than 4,000 years. Legend has it that Yan Di, one of three rulers in ancient times, tasted all kinds of herbs to find medical cures. One day,as he was being poisoned by some herb he had ingested; a drop of water from a tea tree dripped into his mouth and he was saved. For a long time, tea was used as an herbal medicine. During the Western Zhou Dynasty, it was a religious offering. During the Spring and Autumn Period, people ate fresh tea leaves as vegetables. With the popularization of Buddhism from the Three Kingdoms to the Northern and Southern Dynasties, its refreshing effect made it a favorite among monks in Za-Zen meditation. 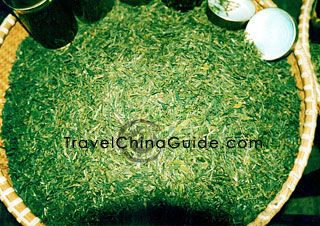 Tea as a drink prospered during the Tang Dynasty, and tea shops became popular. A major event of this time was the completion of Tea Classics, the cornerstone of Chinese tea culture, by Lu Yu, Tea Sage of China. This little book details rules concerning various aspects of tea, such as growth areas for tea trees, wares and skills for processing and tasting of tea, the history of Chinese tea and quotations from other records, comments on tea from various places, and notes on what occasions tea wares should be complete and when some wares could be omitted. 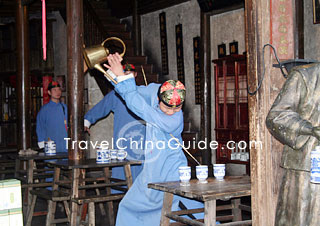 Tinted by the cultural style of the Song Dynasty, tea culture at this time was delicate and sumptuous. New skills created many different ways to enjoy tea. The Ming Dynasty laid the foundation for tea processing, types and drinking styles that we have inherited. 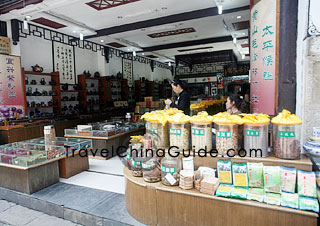 During the Tang Dynasty, a Japanese monk brought tea seeds from Zhejiang Province to Japan. Later in the Southern Song Dynasty, Zen masters brought tea procedures and wares from China to Japan, promoting the initiation of the Japanese tea ceremony. In the Song Dynasty, Arabic merchants exported tea from Quanzhou, Fujian Province. In the Ming Dynasty, tea was sold to Southeast Asian and South African countries. In 1610 it went to Europe via Macau in a Dutch merchant ship. Thus it became an international drink. 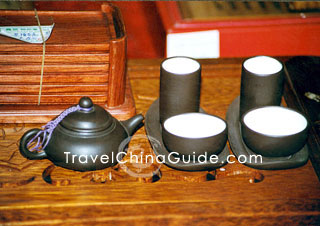 There are four basic steps.
1. Observe. Good or fresh tea has a green luster in a tight shape, but poor one is loose and dull. The leaves should be dry enough to make a rustling noise in the palm.

2. Smell. The fragrance should be pure without a charred taste or acid smell. Good tea, especially fresh one, has a natural aroma like orchid or jasmine while the poor one smells stale.

3. Taste. You can taste the leaves by chewing them carefully. Good tea leaves have a fresh mellowness. You can also infuse some to see if the leaves extend smoothly and sink slowly to the bottom. Good tea liquor is emerald green or golden. It has a tint of bitterness with a lasting sweet aftertaste. Stale liquor is malodorous and dark brown.

4. See the infused tea leaves. The infused leaves should be even without impurity.

After you purchase good tea, keep it in a dry cool place, avoiding direct sunshine. An airtight container is a good choice. Avoid putting teas of different aromas too close.